Looking For A Weekend Project? Build Your Own Hyundai Soapbox Racer

Hyundai has unveiled their latest car, which is made out of wood and requires assembly.

Known as the Soapbox, the model was created by engineers and designers from the Hyundai Motor Europe Technical Center as a fun project which families can build together.

Despite being a soapbox racer, Hyundai says the gravity-powered vehicle was developed just like a regular car. As they explained, engineers first built the chassis and then designers sketched ideas on paper before building 3D models. After a final design was selected, another team worked on color and trim.

This wasn’t exactly a smooth process as Hyundai admitted the car’s original design featured double-curved surfaces which would have been hard for people to replicate at home. Given this, the model was redesigned to be easier to build using materials that are readily available at a typical hardware store.

While the styling draws inspiration from the 45 concept, the company “adapted the joystick steering concept from [the] Prophecy show car.” However, in the Soapbox, the joysticks are simply screwdrivers.

The Soapbox is constructed out of basic materials including wood, metal rods, brackets and screws. The wheels are sourced from a wheelbarrow and the model features a simple braking system.

The car measures 69 inches (1.76m) long and 39.3 inches (1 meter) wide, which means it can fit into vehicles such as the i30 Wagon. Hyundai also noted it can support the weight of an adult, even though it’s built for children.

If you feel up to the challenge, you can build your own Soapbox using these instructions (PDF). 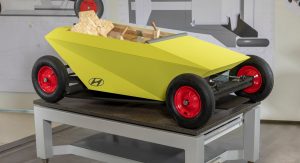 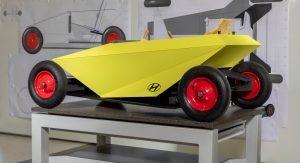 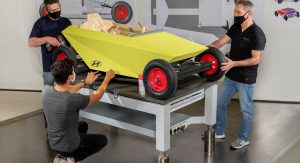 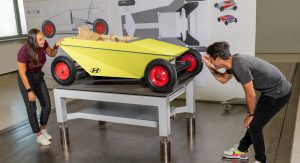 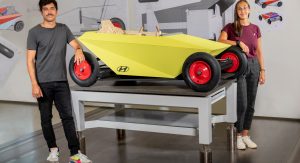 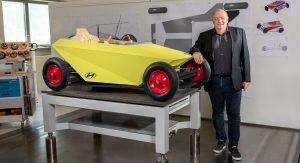 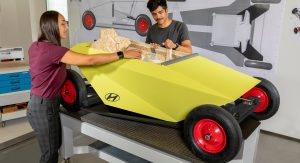 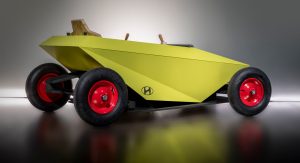